The eight-part series was filmed on board MSC Grandiosa shows four of the famous sisters – Coleen, Anne, Maureen and Linda as they embark on an adventure around the Mediterranean.

The sisters set sail from Genoa in Northern Italy on their first holiday together in 20 years visiting some of the region’s most popular ports including Palermo, Marseille, Civitavecchia and  Barcelona. From exploring the sights, to making the most of everything the incredible ship has to offer, the sisters explore the Mediterranean in style on this once in a lifetime trip, all culminating in a final one-off performance of their hit song ‘I’m in the Mood for Dancing’ in the ship’s elegant 900 seat theatre.

Speaking about the start of the new series, Antonio Paradiso, Managing Director, MSC Cruises UK & Ireland commented: “We have been working on this project for almost a year and it’s something we’ve been incredibly excited about right from the word go. We know how much our ships have to offer and what memorable experiences our guests have onboard but working on a TV series like this allows the UK audience to see on a big scale what a great holiday choice a cruise is.

He added “Watching the show it really comes through how much fun The Nolans had onboard MSC Grandiosa and we hope that the audience watching will see what a great experience the sisters had and feel inspired to take a cruise holiday too.”

MSC Grandiosa is the largest ship in the MSC Cruises fleet of 17 ships and came into service in October 2019. The ship carries 6,300 passengers and has 20 bars and lounges, two theatres and 12 unique dining venues including the Teppanyaki restaurant which was firm favourite with The Nolans during their voyage.

The Nolans Go Cruising will feature on Quest Red every Tuesday at 10pm from the 7th July – 25th August. The episodes will also be available to view via on demand service dplay following the broadcast. 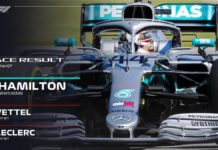 Are Ferrari Living Off Past Reputation In Formula One?