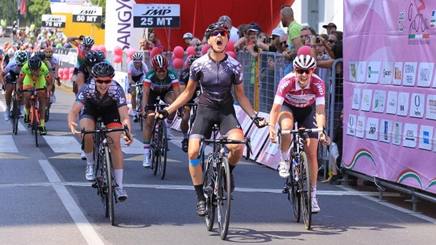 London – There was an Italian victory at the Prudential RideLondon Grand Prix on The Mall this evening, but it was Barbara Guarischi who was yelling in delight rather than the much-fancied defending champion Giorgia Bronzini as the Velocio Sports rider snatched the win by half a wheel in a bunch sprint at the end of a race in which half the field were wiped out in a huge crash with one lap to go. [photo Barbara Guarischi]

Led out by Trixi Worrack, Barbara Guarischi timed her effort to perfection to pip Shelley Olds on the line after three-quarters of an hour of helter-skelter cycling around St James’s Park, with Olds’s Ale Cipolinni team-mate Annalisa Cucinotta taking third barely a wheel’s rim behind.

Barbara Guarischi ‘s team leader Lisa Brennauer had made a break with five of the 15 1.3-mile circuits to go, and when the world time trial champion was reeled in the Velocio squad reorganised at the front of the peloton to get Guarischi into prime position.

With Giorgia Bronzini and her Wiggle Honda team-mates in the hunt, and 2013 winner Laura Trott among the contenders, it was never going to be easy. But Worrack and Brennauer pushed hard as the riders turned off Horse Guards Road and unleashed Guarischi with 100 metres to go.

The Italian has been in fine form recently, winning a stage at the Giro d’Italia Femminile, and she launched herself at the line alongside her Cipolinni rivals before throwing her right arm up in triumph and screaming at the London sky, full of joy at a job done well. “I can’t believe it, I really can’t believe it,” said the 25-year-old.

“This is all down to teamwork; together we can do anything. All season we have worked together and we have won a lot. “Today was a good race for us; a great race for me.

Our tactic was to go all out for me to win the sprint. But it was not easy because there were a lot of strong riders in the race and it was hard to compete. “Luck was with us today and in the last lap my team was really super. Trixi pushed for me in the last 200m and then with 100m to go I pushed hard and it was done.”

Twelve months ago it was Giogia Bronzini who took victory on the line, but this time the 32-year-old had to settle for fifth behind her Wiggle team-mate Annette Edmondson, her late dash for the line hampered by the aftermath of the crash Trott was affected by the pile-up too as her main Matrix Pro lead-out rider was taken out, leaving the double Olympic champion high and dry on the last lap.

“It was really too fast for me and I was too far back,” said Trott, who has been training hard on the track for the Rio Olympics. “Then there was that massive crash, which took out my lead-out girl, so that was it.

I was left to fend for myself and I wasn’t ready for such a fast sprint.” Olds and Cucinotta were a fraction short of firepower too as their four-woman outfit came up just short of their target against the larger set-ups. “It was such an aggressive race and we only had four, so it was tough against the bigger teams,” said Olds. “We had to be careful we didn’t let anything go and we wanted to be up for the sprint too, so it was hard work. “We didn’t get on top step and that was our goal so we are a little disappointed. But we had two on the podium so we know we are stong.”

Cucinotta led briefly as the sprinters began to wind-up for their final efforts, only to be overhauled when Guarischi sprung from the Velocio trap. “I started early in the sprint but Barbara was very strong and that was kaput,” she said.

For Olds, racing with Ale Cipolinni for the first time, it was only the team’s inexperience that cost them the victory. “When we come together better we can win,” said the American who moved from Bigla Pro Cycling earlier this year. “We placed two and three today, but we know in the future we can win. We’ll be back.” After claiming the biggest win of her career in front of Buckingham Palace, Guarischi will surely be back too. “This win was really important for me,” she said. “I was a bit tired when I arrived in London but with this team it’s impossible not to race well. “It’s the first time I’ve done this race and it was amazing.

There were super finishes in the two criterium races for youth riders, which brought day one of the world’s greatest festival of cycling to a close, the next generation of cycling champions racing over the same iconic course as the pros. National road and track champion Ella Barnwell added a third title to her growing list of honours when she led Sophie Williams to a Welsh one-two in the girls’ race ahead of Elizabeth Catlow of the East Midlands. “That was a great experience,” said Barnwell, who is clearly getting used to the winning feeling.

“The race was quite fast and technical in some parts. I wasn’t nervous because I won the nationals a few weeks ago, but it feels really amazing to win on this course. It’s such a great opportunity.”

Jake Stewart grabbed an impressive win in the boys’ race, the West Midlands rider covering early attacks before sprinting across the line ahead of Central region’s Charles Page, with Jim Brown of Yorkshire third.

“I knew it was a quick circuit so I was hoping to win,” said Stewart, who finished second in the recent British Championships.

“I chased down a few breaks early on then it was just the top five riders for the last two laps. “I am just chuffed to come out on top, over the moon. It’s great to be racing somewhere like this with such a great atmosphere. It’s inspiring, something you can only dream of as a youth rider.”

( italoeuropeo only italian magazine present in the race) 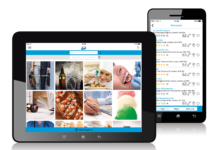 The APP is another big step to provide free visibility to all Italian businesses in the UK. 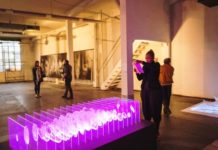