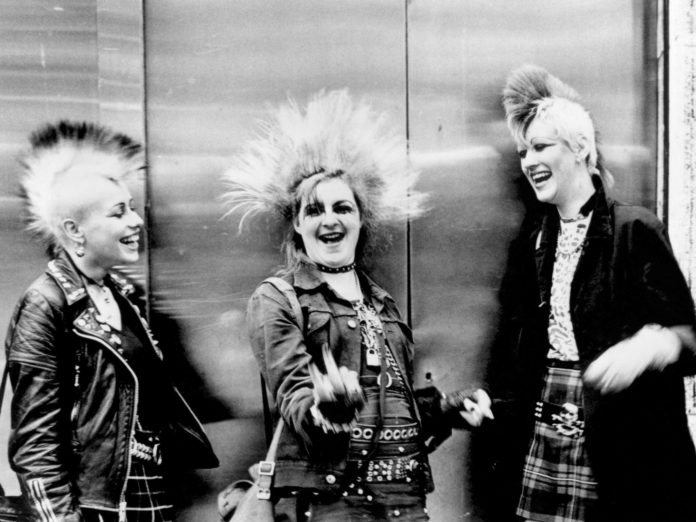 Punk.London, the year-long festival commemorating forty years of the enduring influence of punk across London is drawing to a close but it’s not going quietly.

Following a summer that has seen a punk themed closing weekender at the Design Museum, Don Letts’ curated film season at the BFI and even provoked Viv Albertine to graffiti in the British Library, there’s still more to come. A new exhibition and a high-profile debate mark the beginning of the end of this eventful year.

From handmade mixtape sleeves and DIY fanzines, to the radical clothes sold on the King’s Road, the Museum of London’s new exhibition, Punks, will tell the stories of ordinary punks of the late 1970s. In 1976 punk crashed into London and changed music, fashion and attitudes forever.  In a move away from the big names of punk, the Museum of London invited people to share their punk tales and lend or donate their memorabilia to be part of this exhibition.

Jen Kavanagh, curator of Punks at the Museum of London, said: “Punk was so much more than just the music. It was a philosophy, a lifestyle, a community. The 17 incredible people who have contributed to this exhibition talk about their punk days with so much passion and affection and we wanted to get this across in the stories we display. Punk touched the lives of teenagers and young people in London in 1976, and for many it changed their lives forever.”

Lesley Edgar had always been interested in fashion, so when punk arrived she embraced the opportunity to push the boundaries with what she wore. Shopping in jumble sales and markets, clothes would be customised with chains and safety pins. Tartan kilts and men’s string vests formed her look. Lesley cut the sleeves off t-shirts to turn them into mini dresses, which she wore with fishnet tights or homemade plastic trousers

Trev and Bev met in 1978. They were both fully immersed in the punk scene, spending their weekends on the King’s Road and at gigs. Buying clothes in second hand shops, or hanging out in the Chelsea Potter, they embraced the sense of community that punk brought. Nearly 40 years later they still go to gigs and hang out with the friends they made in the 1970.

Zoe Neale was introduced to punk by her friend Jane. Bored of the prog rock that dominated the early 1970s, Zoe loved the energy and pace of punk. As she lived in the suburbs, she’d have to travel into London to attend gigs, and was a regular at the Marquee.  Always experimenting with different coloured hair, her parents were appalled by her appearance, but eventually accepted her love of punk

David Black was attending college in Norwich when he first encountered punk. He’d make trips into London to buy clothes, treating himself to a Destroy t-shirt from Seditionaries and a bondage shirt and mesh tie from Boy. Dave treasured his Destroy top and didn’t mind spending a lot to own it. But shopping on the King’s Road meant dodging the teddy boys, who were often looking for a fight

Ø  Punk London debate at the Museum of London – 18 November

A live, no holds barred debate bringing together opposing ideas and arguments about the ideas of punk, its journey over forty years and what it means for the future. High profile line-up to be announced soon.

7 September – 1 October
Gregory S. Moss’s punkplay is a riot of a play told at breakneck pace with a killer soundtrack. It’s a coming-of-age story about subcultures, friendship and not-fitting-in – all on rollerskates. @punkplayLDN for more info.

19 September – 14 October
A new 50 minute one-man play by Leon Fleming we explore the true nature of hero worship and what it means to be punk.

Punk: Originals at Omnibus, Clapham
7 September – 1 October
Omnibus are holding an exhibition of iconic yet very personal photographs by Erica Echenberg called Punk: Originals. Erica Echenberg was there at the birth of Punk and took pictures of what she saw, documenting this remarkable and influential movement from the inside.

In 1975 Pete Stennett opened a shop at 162, Hoe Street in Walthamstow with his wife Mari, the now legendary Small Wonder Records. After seeing The Sex Pistols perform at Walthamstow Assembly Hall on 17 June 1976 he was inspired to start a label and transform the shop into the place to go for the latest new sounds of punk. Punk Waltham Forest 2016 celebrates Small Wonder with a new pop-up exhibition events and talks to mark the 40th anniversary of the Sex Pistols gig and raises awareness of the borough’s local punk heritage.

Rough Trade will curate a hugely exciting series of events centred around collaborations between friends and supporters of the label and shops over the last 40 years. Although a full announcement can’t yet be made, suffice to say these events will bring together some of the most original, vital artistic talent out there in some of the capital’s best venues to create genuine once-in-a-lifetime musical magic. Expect an extravaganza at the Barbican, innocence at The Shacklewell Arms, Cabaret and Quiz at The Moth Club and intimacy at Islington Assembly Halls.

Stuart Hobley, Head of Heritage Lottery Fund London, said: “Kicking and screaming, punk quickly established itself as a voice for youth culture. The upcoming exhibition at the Museum of London, and the whole Punk London year, looks at the stories of individuals who embraced the world of punk; from fashion to music and politics – how the power of punk changed their lives.”

Further information about all other events can be found at www.punk.london.