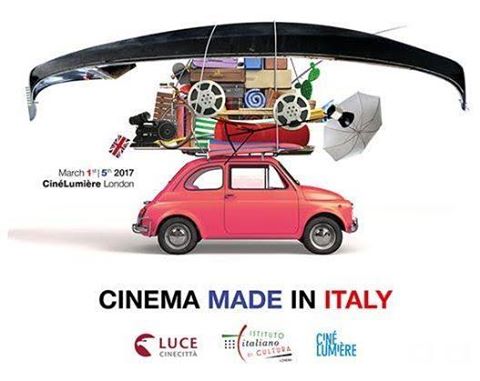 Cinema Made in Italy returns to London’s Ciné Lumière from 1 – 5 March 2017. This seventh edition of the festival brings a brand new array of exciting and inspiring films to the South Kensington cinema. CINEMA MADE in ITALY, now in its 7th edition, is the only official showcase of contemporary Italian Cinema in London, organised by FilImItalia, the Italian State Film body, with the collaboration of the French Institut in London and the Italian Cultural Institute in London. (Official Radio LondonONEradio, unique italian radio in London www.londononeradio.com)

Here the film in stage

Following a takeover, the new owner of an Italian textile plant (played magnificently by Anne Consigny, who was most recently seen in Paul Verhoeven’s Elle), flies in from Paris to propose the plan masterminded in order to preserve the workers’ future.  When the women in the plant’s council learn that nobody will lose their job, provided everyone gives up seven minutes of their daily break, it seems too good to be true. But when they start to analyse what the seven minutes actually represent, it soon dawns on them that more is at stake than merely their workers’ rights. Based on a true story, 7 minutes is a taut and gripping drama featuring emotionally anchoring performances from notably Clémence Poésy, Ambra Angiolini and Ottavia Piccolo.

Following his brilliant debut feature Due Vite per Caso (which has won over 15 awards), Alessandro Aronadio is back with a sharp and witty comedy. Stylishly shot in black and white, Ears follows a day in the life of a hapless young university lecturer, as he wanders around the streets of Rome, questioning the true purpose of his life. Clarity is obtained after a succession of Kafkaesque situations, which include an encounter with a bevy of mistrusting nuns, an outlandish rapper, and an impertinent ear specialist. Made on a micro budget under the umbrella of the Biennale College Cinema programme, Alessandro Aronadio’s absurdist comedy was an instant hit when it premiered at last year’s Venice International Film Festival.

Co-produced by the Dardenne brothers, and loosely based on Giuseppe Ferrandino’s Pericle il Nero, Stefano Mordini’s third feature is a contemporary Italian mafia film set in Belgium and France. Riccardo Scamarcio (Burnt, Effie Gray, Third Person) is a loyal Camorra low-life who makes ends meet by doing dirty jobs for Don Luigi, a Neapolitan crime lord and pizzeria owner based in the outskirts of Liège.  When a job goes wrong, he has no choice but to go on the run, and after a brief spell in hiding, ends up in Calais. Alienated, and deep down yearning to be part of a family, he seeks refuge in the form of divorced bakery worker Anastasia, played superbly by French actress Marina Foïs (Paris Follies, Polisse, Irréprochable). They embark on a bittersweet whirlwind romance, as they endeavour to sidestep the shadow of his tormented past.

Produced by Angelo Barbagallo (Dear Diary, The Son’s Room, Certified Copy), Roberto Andò’s slick mystery thriller centers on a simple monk of the Carthusian order, who shakes things up at a G8 meeting held in a luxury hotel on the Baltic Coast. After a high-ranking official is found dead in his room, it transpires that the purpose of the state treasurers’ gathering is to introduce radical economic reforms that will have irreparable destructive effects on less-developed countries in the world. Stopping them soon becomes a race against time…. The elegant mise en scène, Oscar-winning composer Nicola Piovani’s exquisite score, along with a stellar cast including Toni Servillo, Daniel Auteuil, and Connie Nielson, make for irresistible viewing.

IN GUERRA PER AMORE

Following on from The Mafia Kills Only in Summer, Pierfrancesco Diliberto (aka Pif) brings us another funny and touching tale peppered with historical facts.  It is 1943, and World War II is in full swing. In the heart of New York fresh faced Arturo (played by Pierfrancesco Diliberto) has fallen head over heels for his restaurant boss’ daughter Flora. The feeling is mutual, but Flora has been promised to the son of an influential New York mobster. The only way Arturo will be able to marry his beloved, is if he is granted approval by her father, who lives in a small town in Sicily. Young and broke, Arturo enlists in the US Army, which is preparing to invade the island, an event which will change the history of Sicily, Italy, and the Mafia forever.

Francesco Diliberto (aka Pif) was assistant director to Marco Tullio Giordana on the anti-Mafia film I Cento Passi in 1998. Besides being a film director, writer and actor, he is also a satirical current-affairs broadcaster who has contributed to numerous Italian TV shows, including Le Iene. He has had his own show, Il Testimone, on MTV since 2007 and hosts the radio show I Provinciali on RAI 2, along with his screenwriting collaborator Michele Astori.

Set in Turin, Pawn Streets reveals an insider’s view of the goings on behind the closed doors of a local pawnbrokers, and the wheeling and dealing which takes place in the streets outside. Each and every object tells a different story: a cherished fur coat is handed over by a transvestite who has become estranged from her family; a precious gold necklace fetches a moderate price for a desperate mother of two. Meanwhile, a penniless grandfather unwillingly becomes embroiled in black market pawn broking, so he can afford to buy a hearing aid for his three year old grandson. Irene Dionisio, who is also a documentary film-maker, succeeds in rendering an honest account of some of the circumstances which might drive people to pawn their most cherished belongings, as a last resort. Pawn Streets is produced by Carlo Cresto-Dina, whose previous credits include The Wonders and Corpo Celeste.

Sam is a 16 year old skateboarding fanatic who has his whole life ahead of him. When his girlfriend breaks the news that she is pregnant, the only person he can turn to is his all-time hero and skateboarding legend, Tony Hawk. Reminiscent of the film Sliding Doors, Sam is inexplicably hurtled into the future and offered a glimpse of what will be…. or what could be.  At the end of the day, it is up to Sam to make the right decisions. Based on Nick Hornby’s successful novel of the same name, Slam is all twists and turns and heel flips, and features a splendid performance by Luca Marinelli, who starred in last year’s They Call Me Jeeg Robot. Prior to making his first feature film, Andrea Molaioli worked as assistant director and second director on numerous films, including Nanni Moretti’s The Son’s Room and Dear Diary. In 2008 his film The Girl By the Lake won three David di Donatello Awards.

The Battle of Algiers tells the story of the life-and-death struggle between the French colonial government of Algeria and the Algerian Liberation Front, the FLN, who wanted the French out and were willing to set off bombs to do it. The French sent in their elite Paratroopers with the order to use Any Means to break the insurgent – torture included. It’s a true story, done on location with many of the FLN appearing in it, including the producer who was an FLN leader. This film, which was first released in 1966, is a passionate yet completely impartial record of struggle which led to Algeria’s Independence.

The Battle of Algiers is distributed in the UK by CultFilms: www.cultfilms.co.uk. Digitally re-mastered in high definition from restored archive elements approved by the filmmakers, this all-time classic release of The Battle of Algiers also commemorates the 50th anniversary of Algerian independence. The new version also includes some previously unseen footage, making this the most complete edition ever. The restorationwas curated by Cineteca di Bologna and Istituto Luce-Cinecitta, in collaboration with Surf Film, Casbah Entertainment, and CultFilms.

In Vangelo theatre director Pippo Delbono visits a migrant centre and meets the refugees who have come to seek shelter there. They are in limbo, waiting to find out if they will be allowed to stay, or simply be moved on to the next holding area. He becomes part of their everyday lives, in which they are suspended between painful memories and an uncertain future. Slowly but surely, the refugees open up to him, and tell him their stories. Some of these feature on screen, others remain secret. Through the lives of these people, the inevitable protagonists of a new age, Delbono’s vision for his theatrical production of the Gospel starts to take shape.

I WAS A DREAMER (Il più grande sogno)

Mirko is a 39 year old father of two, who returns home after an eight year stint in jail. He dreams of being given a second chance, and attempts to leave behind a life of violence and petty crime once and for all. The perfect opportunity arises when he is unexpectedly elected president of the neighborhood committee in his local area in a run-down suburb of Rome. Before long, Mirko starts putting all his energy into transforming the lives of those around him, setting up a soup kitchen and food bank, and even persuading fellow down-and-outs to grow tomatoes on a nearby allotment. Little by little, he manages to reconcile with his two daughters, and prepare for the arrival of his third child, which his ever-patient wife is expecting. Michele Vannucci met lead actor Mirko Frezza when he was auditioning for his graduation film in 2012. Hanging out with him for three years inspired Vannucci to write the screenplay for I Was a Dreamer, which is based on Mirko’s real-life experiences.

IN GUERRA PER AMORE + Q&A