Air in London is so polluted that the mayor of the City, Sadiq Khan, has proposed an alternative solution to the problem: offering motorists £3500 to demolish their old cars and buy greener vehicles. If the plan is accepted, the government will give families with low income £2000 to scrap 130,000 cars and £1000 for older taxis.

According to Khan, this solution, which would cost about £500m, could reduce nitrogen monoxide emissions by 40%.

Pollution is so bad that Khan has asked Londoners not to go out if not necessary. He also said that this seems to be the only solution to tackle the problem.

According to the government estimates, about 50,000 people die every year because of pollution and £27.5bn are spent because of this issue.

Sadiq Khan has passed the proposal to ministers, such as the chancellor Philip Hammond. Westminster, however, has said that it would also be good to oppose other sources of pollution, such as wood stoves in UK homes.

Earlies this month, the prime minister Theresa May said that tackling pollution will be one of her government’s main policies. However, she said, more needs to be done in order to bring back the good quality air every person wants.

According to Gerry Keaney, Chief Executive of the British Vehicle Rental and Leasing Association, Khan’s proposal could have many benefits if motorists are willing to collaborate. 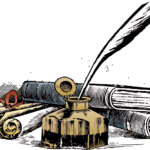 Culture Staff Italoeuropeo - April 7, 2020
0
The first edition of the International Young Authors Award organised by Ciao Magazine, ended with the designation of the winners. The event, reserved for students of...