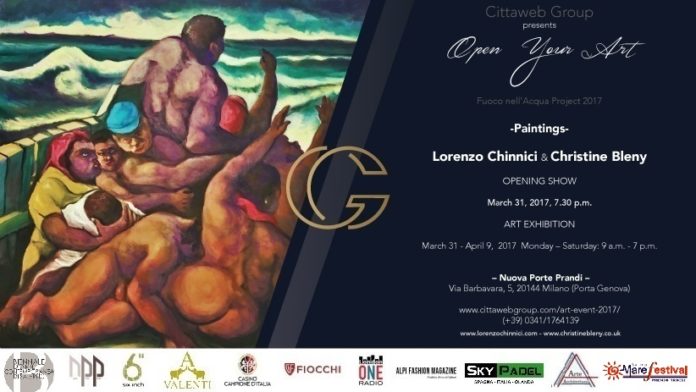 Open Your Art invites you to immerse in the evocative bright and coarse language of maestro painter Lorenzo Chinnici and the ethereal, feminine work of French artist, Christine Bleny.

This exhibition involves great dynamics. Here you will see the intense, authentic universe filled with insular imaginary of one of the most significant Sicilian artists, in contrast to the fragile, mysterious feminine nature of Christine Bleny.

Two interprettions, different in technical styles and emotion, united by a thin common thread: the suffering.

The works of Chinnici represent a coarse and indignant emotion which is subdued by the delicate and often concealed suffering of the works of the French artist.

At Open Your Art, the artists will exhibit the paintings of maestro Chinnici titled Evasion, that was a witness of his meeting with Christine Bleny during The Synergy of Sons exhibition held in London in 2015.

In the painting, one can see the evidence of a heated argument between the two artists in which the French painter indignantly threw a glass of wine on the canvas in protest to the Sicilian artist’s painting style, creating a red stain on the work.

A year later, Lorenzo Chinnici and Christine Bleny met at the opening show of Fire on the Water exhibition and the initial conflict, caused by the difference of artistic languages and the hot temper of both, gave birth to a dialogue that grew into a strong friendship and desire of discussion.

The two artists have sealed their agreement by putting their signatures on the painting.

Giovanni Carfì Urso, curator of the exhibition, has created the title Fire on the Water to reflect the impact that two powerful elements have, when they find a balance and a dialog for confrontation.

The exhibition of Milan opens a new season of Fire on the Water project, which came to life on the shores of Lake Como in the summer of 2016: a series of exhibitions that during the year of 2017 will take place in such towns as Positano, Venice and Taormina.

The works of the maestro Chinnici will also be presented at prestigious international exhibitions in New York and Monte Carlo.

Open Your Art is also an opportunity to showcase the contrast between art and design, taking place in a showroom of doors which is the archetype of architecture and which has always been a refined and exclusive object of design.

The inauguration ceremony will be performed by the art critic Antonio Lombardo, who will introduce the artists and will guide the visitors to the understanding of the exhibited artworks. During the evening a monograph of the artist Lorenzo Chinnici will be presented under the editorship of a famous Italian art critic Vittorio Sgarbi.