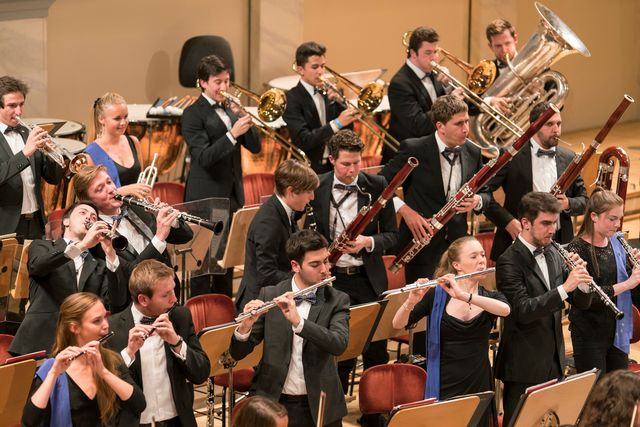 The EUYO announces a new seat in Italy and expanded artistic relationships within the EU in a bold plan for the Orchestra’s future The EUYO is today announcing major initiatives to develop its pattern of work in Europe.

Following the recent announcement of the EUYO’s expanded partnership with Campus Grafenegg, the Orchestra has accepted an offer from Dario Franceschini, Italian Minister of Culture, and the Italian Ministry of Cultural Heritage and Activities and Tourism, to establish a legal and operational seat in Ferrara and Rome, and a new broadcast partnership with RAI, alongside its current Italian work in Bolzano.

The Orchestra is also announcing a new partnership in Brussels. These arrangements represent the Orchestra’s first change of headquarters since it was established in London in 1976.

From 2018, Italy, the home of the EUYO’s Founding Music Director Claudio Abbado, is to become the Orchestra’s legal and operational seat, following the EUYO’s acceptance of a proposal from Dario Franceschini Italian Minister of Culture, the Italian Ministry of Cultural Heritage and Activities and Tourism, the Mayor and Municipality of Ferrara, and RAI-Radiotelevisione Italiana S.p.A.

 The EUYO also begins annual spring and autumn residencies in Ferrara at the Teatro Abbado from 2018, with formal and informal symphonic and chamber performances throughout the year. Supporting these activities the EUYO will open an administrative department in Ferrara.

 The Italian announcement follows Grafenegg and the EUYO’s recent announcement that from 2018 the EUYO is expanding its relationship and work with Campus Grafenegg, the Grafenegg Festival and the Government of Lower Austria, where the Orchestra has been in partnership with Grafenegg in the European Music Campus since 2014. The Orchestra becomes Resident Orchestra at Grafenegg and Partner in Campus Grafenegg, whilst Grafenegg becomes the EUYO’s summer home and principal summer venue partner.  From 2018, the EUYO will be establishing an office in Brussels following an invitation from the Brussels Philharmonic.

The EUYO will assist a consortium of Flemish orchestras, concert halls and conservatoires in initiating the Youth Orchestra of the Flemish Community. The Italian initiatives are designed to provide the most effective structure, funding, training and performance opportunities for the European Union Youth Orchestra in the coming years, complementing the Orchestra’s residency at Grafenegg .

They follow the 2016 decision by the European Commission to continue to support the Orchestra as a cultural ambassador with funding from the Creative Europe programme. “The European Union Youth Orchestra has accepted the offer of the Italian Government to be hosted in our country.

This prestigious cultural institution, founded in 1976 with a resolution of the European Parliament and based in London, will find a home in the Teatro Abbado in Ferrara.

I thank all those who have worked hard on this important achievement from Undersecretary of State, Ilaria Borletti Buitoni, who personally followed the negotiations, to Silvia Costa, Member of the Culture Committee of the European Parliament, who forwarded the proposal at Community level, to the Mayor of Ferrara, Tiziano Tagliani. I also express my gratitude to RAI, which with its commitment lay the foundations for a fruitful collaboration with the EUYO”.

“As Co Chairmen of the EUYO, we are delighted by the new agreement with the Italian government and the City of Ferrara. This is a major endorsement of the achievements and potential of the EUYO as practical evidence of Europe in action. Combined with our recent agreement with Grafenegg in Lower Austria, constantly underpinned by core funding from the EU, the Orchestra can look forward to a positive and secure future. This is a good day for musical and cultural cooperation in Europe. We are grateful to all parties for their vote of confidence in the European Union Youth Orchestra”

The European Union Youth Orchestra (EUYO) is one of the world’s pre-eminent symphony orchestras. Described by the UK Guardian as having “gripping, exhilaratingly good orchestral playing, surging with energy, laser-sharp focus and collective daring… [with] a technical prowess that is downright terrifying”, and by EU commission President Jean-Claude Juncker as “the best possible ambassador for the European Union” it has provided an exceptional bridge between music colleges and the professional music world for generations of Europe’s finest musicians since its foundation in 1976.

A truly global brand, the EUYO has performed in most of the world’s major concert halls and festivals, including notable venues such as London’s Royal Albert Hall, New York’s Carnegie Hall, the Vienna Musikverein, and Boston Symphony Hall.

From Amsterdam to Abu Dhabi, Moscow to Mumbai, Seoul to São Paulo, the Orchestra has appeared in more than two hundred venues across four Continents.

The EUYO’s 3,000 alumni have all come through the Orchestra’s rigorous, annual audition process conducted in all (currently 28) EU Member States, and many are now notable conductors, soloists, teachers, and instrumentalists working with major orchestras throughout the world, including the London Symphony Orchestra, the Berliner Philharmoniker, the Boston Symphony Orchestra, and the Royal Concertgebouw Orchestra.

The EUYO’s Summer Home and Principal Venue Partner is Grafenegg, where in 2014 both organisations launched the European Music Campus