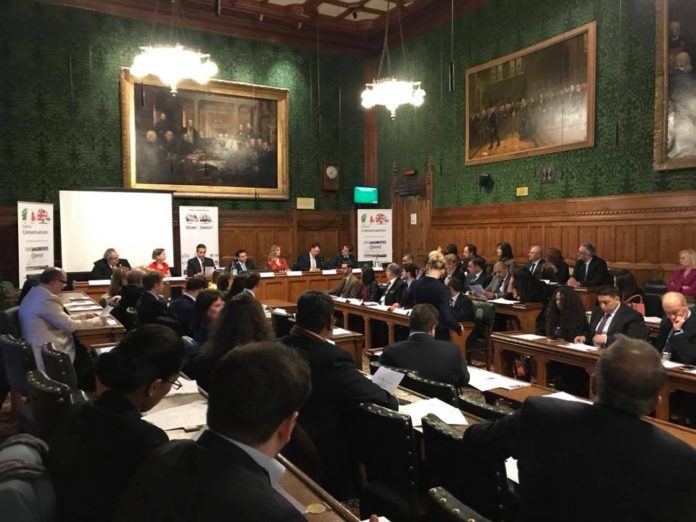 Deputy Chairman Stefania Signorelli promptly opened the meeting and thanked all of the volunteers who dedicate their free time for the progress of the Italian Conservative Group. She praised their hard work of canvassing and noted their dedication, no matter the weather.

Special Guest The Right Hon. Mark Field MP, Minister of  State for the Foreign Office and first supporter of the Italian Conservatives Group said, UK is leaving the EU, but we will remain close friends of the EU going forwards. “We have some values in common,” he said.

Field continued, remarking that  Dr.Tania Mathias was a much respected MP and that the “Italian Conservatives Group will support her coming back at the earliest opportunity.” A statement that received much applause.

The focus for the meeting was:

Chairman and founder Christian Vinante Giovannini was most gracious in his welcoming of our newly appointed  Honorary President and Host Alberto Costa MP, and in his appreciation of Stefania Signorelli’s hard work at putting together events in prime locations.

He also thanked (Honorary president) Dr Maurizio Bragagni, for providing a great stand at last year’s AGM in Manchester, remarking that Dr Bragagni is without comparison when it comes to promoting and supporting the Italian Conservative Group mentioning also that this Meeting has been held so close to the crucial 3th of May local elections to Galvanize Activists and Supporters.

Our Honourable President Alberto Costa, a proud son of Italian immigrants, Member of the British Parliament and Knight of the Order of the Star of Italy shared a story that encapsulates the goals of the Italian Conservative Group and the Conservative party.

“Yesterday, a group of school children came to see me. And a young 16 years old girl asked me, “Mr. Costa, how can we get involved in Democracy?”

He continued, “It is my honour to have been selected by you as the Honorary President. Many years ago, when I was growing up in Scotland, in Glasgow, I didn’t think I’d be standing in Committee Room 14, addressing fellow Italians and friends of Italy, supporters of Italy who have come here this evening, and this very room, Committee Room 14.

“When I was first elected three years ago, I was standing in the back, under the green monitor, the room was packed full of conservative MPs, and standing here…was David Cameron, who had won the first conservative majority since 1992.”

Costa went on to explain his support of Dr Tania Mathias, remarking how important it was to have people with her skills, ability and measured tone sit on the green benches in Parliament.

He also prised the 4 Italian Candidates for the 4th of  May local elections that were present at the meeting: Sara Gerzari, Mavie Clare Ambrosino, Salvatore Murtas and Giovannini.

He also assured those of the Italian community in the UK who were not naturalised that he would make every effort to ensure they would have their rights extended not just pre Brexit, but during the implementation period.

He noted that conservatives tend to use a very colloquial language…making it difficult to engage with the younger generation and pointed out the Labour’s use of “plain language” helps them to connect with the youth more easily than with conservatives.

Mavie  Clare Ambrosino spoke about the values of the Conservative party, which has ‘community’ at its core. Italians are naturally community centred, natural engagers and communicators. It is therefore crucial to connect with those Italians in London and more broadly the UK who could make a true difference at the elections. Clare then concluded by reading a letter on behalf of our newly elected Hon. President Dr Maurizio Bragagni, who was unfortunately not able to attend.

In closing, the vice Chairman of the main Conservative Party  Rehman Chishti MP passed by and briefly thanked the Italian Conservatives Group and noted that as a son of immigrants, like so many in that room, it’s important to never give up on their dreams.

During the event the founding Chairman Chris Vinante and the  IC and Westminster Association Administrative Secretary James Cockram announced the new Committee: