London, 30 April 2019 – Aruba.it (www.aruba.it), part of Aruba S.p.A, a leader in data centre, cloud and web hosting services is joining up with the Mission Winnow Ducati team as Official Partner in the 2019 MotoGP World Championship that heads to Jerez de la Frontera in Spain on May 5th for the fourth round of the season, the Spanish Grand Prix.

The Aruba.it logo, which is on the racing leathers of factory riders Andrea Dovizioso and Danilo Petrucci, will be visible in all 19 rounds of the MotoGP championship. The partnership reflects the values that inspire Aruba in the development of its IT portfolio – innovation, speed, security and reliability – sharing with Ducati Corse a strong commitment to technical research that is reflected in the extremely high quality of its products and in its all-Italian passion.

It also confirms the increasing depth of relationship between Aruba and Ducati. Along with the MotoGP partnership, there is also another partnership in the Superbike World Championship with the Aruba.it Racing – Ducati team, a partnership that is now in its fifth successive season. This year, the Aruba.it racing team is spearheaded by Chaz Davies, who joined the team at the beginning of the partnership, and Álvaro Bautista, who recently set a new record at the race weekend at Aragon with 11 wins out of 11. The Aragón Round was an extraordinary weekend for the Aruba.it team and for Ducati itself, which celebrated its 350th victory in the Superbike World Championship. 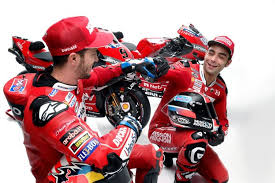 “We are very excited that our partnership with Aruba.it this year has been extended to the MotoGP championship. Our two companies share the same values of technology and innovation, and the presence of the Aruba.it logo on the leathers of Andrea Dovizioso and Danilo Petrucci helps to seal, in an important way, the strong and consolidated ties between us that have lasted for five years with mutual satisfaction,” said Luigi Dall’Igna, Ducati Corse General Manager.

According to Stefano Cecconi, CEO of Aruba and Team Principal of the Aruba.it Racing – Ducati team, “This perfect alchemy would not have been possible without a common vision, which stems from the continuous search for the best performance and the maximum attention to security. The visibility that comes with a partnership with Ducati in MotoGP provides opportunities to penetrate new markets, and make the ‘Made in Italy’ brand stronger in the technology landscape.”

Aruba S.p.A. was founded in 1994. The Italian Group Aruba S.p.A. has established leadership status in a number of countries for its hosting, certified email and domain name registration services. The company has also acquired over 15 years’ experience in data centre construction and management, dedicated server solutions, outsourcing and cloud computing.