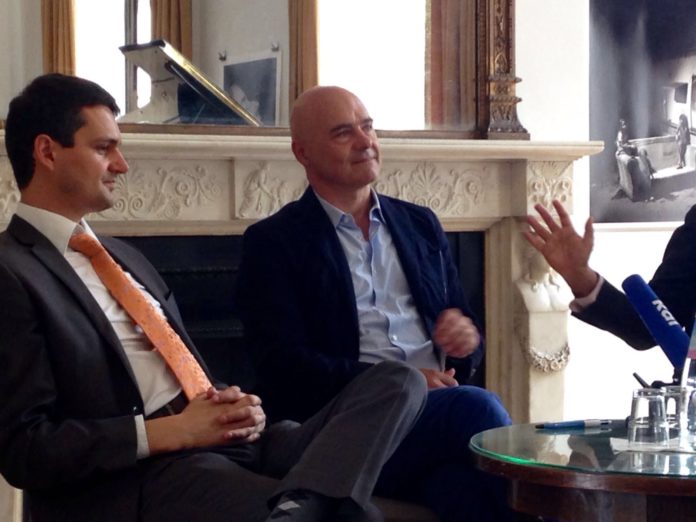 LONDON – Luca Zingaretti, the Italian actor and director famous for his role as Inspector Montalbano in 1999, landed in London yesterday and is already having a busy schedule; he came to the UK to perform in both Oxford (today) and London (tomorrow) with his famous reading-monologue of “La Sirena”, also known as “Lighea”, a story written by Giuseppe Tomasi di Lampedusa, an author from Sicily who is mostly known because of his masterpiece, “Il Gattopardo”.

Zingaretti will perform at the Sheldonian Theathre, in Oxford, and in at the British Museum, in London, as part of the exhibition organized to showcase the golden era of the biggest island in the Mediterranean Sea: “Sicily: Culture and Conquest”. The exhibition, which started last April and is now about to end on August 14th will tell the – almost – untold story of Sicily’s best era, focusing on the period between the 8th and 13th century, when Sicily was conquered and influenced by the Greeks and the Normans, who left lasting marks in the island’s culture and traditions. Visitors are able to know Sicily’s diversity, prosperity and importance throughout these years and in the following centuries.

“La Sirena” is a long story by Tomasi Di Lampedusa, telling the story of two men with opposite personalities: an old retired professor and a young vital journalist. Their casual meeting in a bar, in Turin, turns into a friendship as the tale goes on: their differences are the key point of the story, since the whole narration revolves around the contrast between old and new, North and South, old age and youth, dreams and reality. The old professor has lived the majority of his life bound to the memory of his true love, a mermaid met in Augusta, Sicily; on the other hand, the young journalist lives day by day, bound to no one, enjoying whatever (and whoever) comes his way. The British Museum will be completely changed tomorrow, July 22nd, in occasion of the “Sicilian Splendour” special event, taking place from 6pm: it will be a multisensory evening celebrating the soul of Sicily, past and present – including music, drama, workshops and poetry performances. Zingaretti’s performance will be part of this event, but will not be open to the general public: in the words of one of the curators, Peter Higgs, the museum “will turn into a little Sicily”.

During the press conference held today at the Italian Cultural Institute in London, Zingaretti revealed some behind the scenes of his first “meeting” with this story, which he defined a “fairytale of friendship”, as well as some experiences related to the fame which followed his role as Montalbano. “A lady suggested it to me, more than once, persistently, and then I decided to give a chance“, he told journalists gathered at the Institute. So it was only by chance that he got to know this tale and after that, he decided to bring it to the world through the powerful mean of theathre. He has been touring for four years now but what never ceases to amaze him is his constant discovery and re-discovery of how appreciated and loved Italian culture and “bella vita” are outside of the BelPaese. “Sometimes we take many things for granted and we don’t realise how proud we must be of being Italian“, he added. Of course negative comments will always find their way to weaken one’s reputation but, in his case, good sides have always outnumbered the bad ones. That’s the case of the famous Inspector Montalbano, which is the role Luca Zingaretti is most known for. He shared a little anectode about how he found out about Montalbano’s fame outside of Italy: an English man stopped him in the middle of the street to tell him about how much he and his friends enjoyed watching the series on BBC4.

“It makes me very happy and proud to know that we were able to get to English people’s hearts through an Italian show“, he confessed. The peculiarity and the charm of the Inspector lies, in his opinion, in his being the pile of “Italianity” and in the show’s ability to portray a local reality, which is in contrast with the globalized world we live in nowadays. “He’s a simple man who just needs his country, his town and his job to be happy and feel satisfied“, Zingaretti stated. His success, though, is strictly bound to the fact he is an inspector in Italy: he probably wouldn’t be as well-known as he is, if he had worked in the UK, for example. The way Montalbano is portrayed makes him accessible to people of all ages: he
represents both nostalgia of a long-gone past, full of small local realities and a goal, an objective to reach in order to live a happier life with less fiction and more real life.

Both performances of “Lighea” are sold out: the London show at the British Museum will be watched by 500 people in total, 350 of which will be there to watch it live and it will be one hour long.