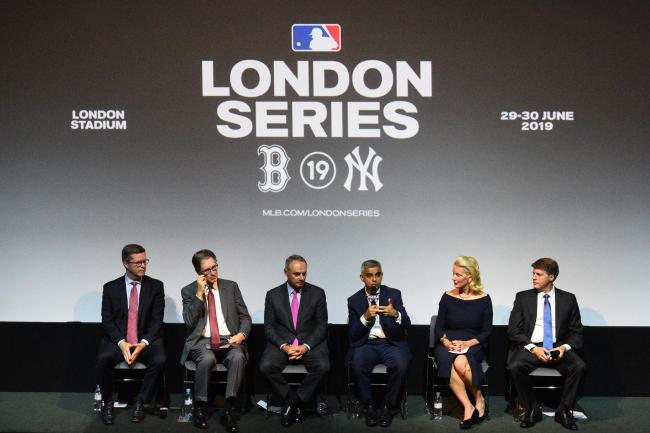 London – (Irene Chiaia) A glorious day for baseball history has just saw its sundown. Yesterday it has been announced that Major League Baseball will officially come to London for the first time. This is a great moment for the European sport field.

The new MLB project, called London Series, has been launched yesterday from the Regent’s Street Cinema which hosted some of the most relevant figures in North American Baseball including:  Rob Manfred ( the 10th Commissioner in Baseball history) John W Henry (Principal owner of the Red Sox Club) Harold Z. Steinbrenner ( the Managing General Partner and Chairman of the New York Yankees), Fran Charles ( MLB Network Presenter), Tim Slavin ( the Chief of Business Affairs and Senior Counsel for the Major League Baseball Players Association) and Jennifer Steinbrenner Swindal ( the General partner and Vice Chairperson of the New York Yankees).

The Mayor Sadiq Khan has participated at the press event giving a huge contribution by building a new connection between American and British sport culture.

The new MLB project called London Series will officially start with a match of the two biggest baseball rivals : The New York Yankees and The Boston Red Sox. The sport event will be hosted in the London Stadium on the 29th of June and on the 30th of June 2019. The structure, previously known as the Olympic Stadium, was built to accomodate London 2012. The London Stadium has hosted some of the most relevant sport events in the last years including: The Rugby World Cup, The RFL Four Nations  and The Race of Champions. The structure features can possibly accommodate a baseball field with the MLB regulations characteristics.

London is thrilled to be the official European capital of baseball. The Mayor of London, Sadiq Khan, hopes in a new generation of British baseball fans. This is a great opportunity for both London and the international sport community generally speaking.

The labour Mayor has also stated that one of the main aims of this deal with the MLB consists in using sports ( specifically baseball in this case) in order to inspire the British people and the London community. In Sadiq Khan’s opinion, this opportunity could have a remarkably positive impact on society. London Series could be much more than just a sport project.

As a matter of fact this may be a remarkable chance even for the most problematic communities in London which are recently struggling with knife and gun violence. This new deal could clearly save several lives of the youngest generations.