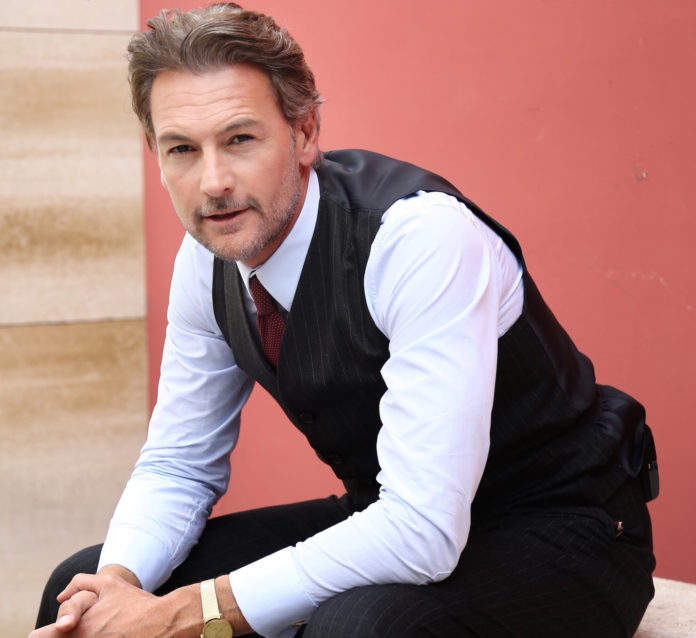 Actor and entrepreneur, Roberto Farnesi made his debut as a model and photo novel actor for the magazines Lancio and Grand Hotel. In 1998 he obtained the leading role, alongside Monica Guerritore, in Femmina, a film by Giuseppe Ferlito. Later he divided himself between cinema and television working, among others, with Franco Zeffirelli in A tea with Mussolini. He currently holds the role of Umberto Guarnieri in the Rai1 daily Il Paradiso delle Signore and for some years he has also been working as a restaurateur alongside his acting career.

It is he himself who tells us about this “double life”, which fills him with satisfaction. 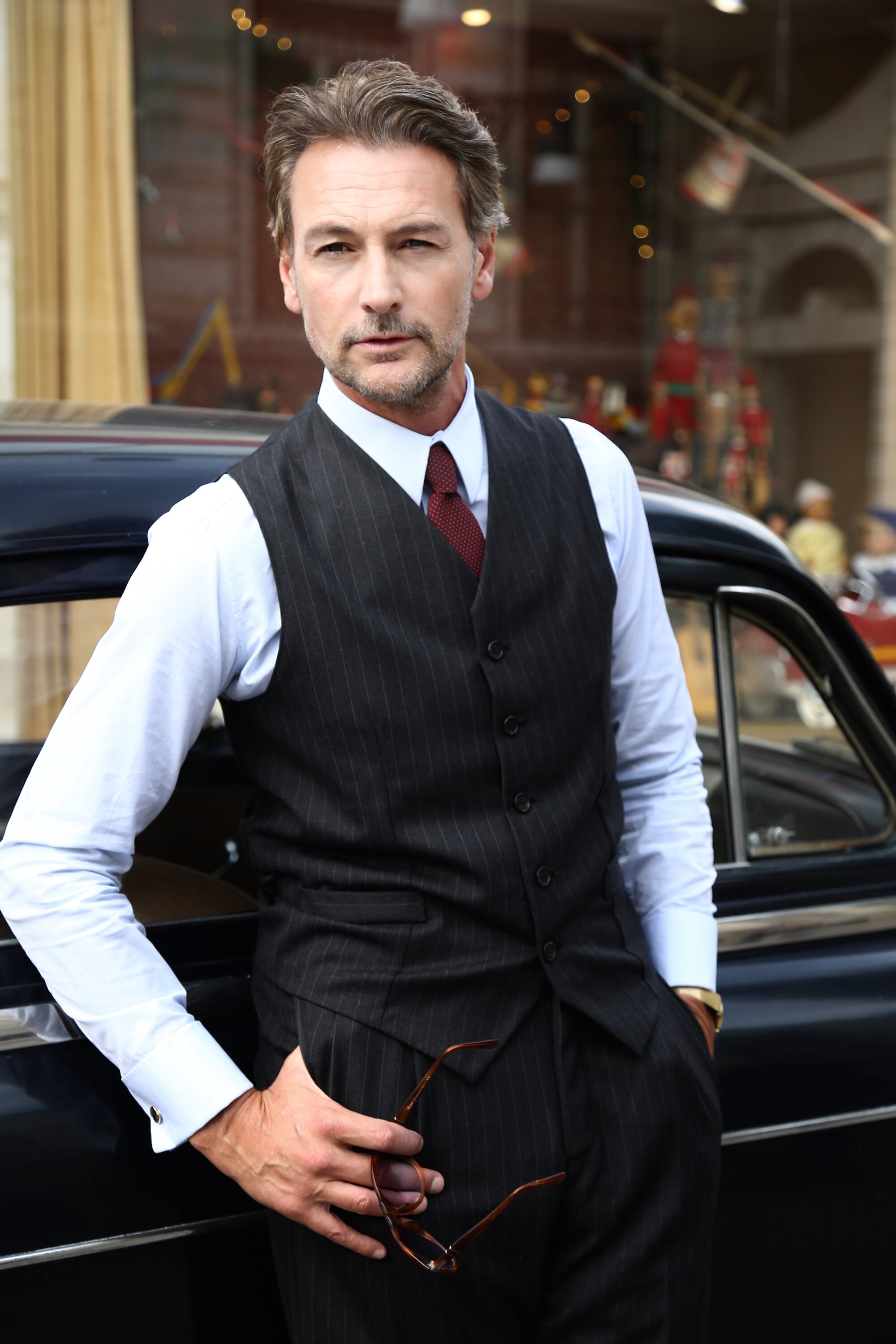 Roberto, can you tell us a little about yourself?

Good question! Compared to a few years ago, today I am a much calmer, more serene person. Achieving serenity is a bit of everyone’s goal: perhaps reaching it 100% is a utopia but trying to get closer is a good ambition. Without taking into account the events that have upset the life of each of us in recent months, I can say that I am experiencing a rather peaceful phase of my life. I no longer lead a worldly life, or almost. I live between Pisa and Viareggio. I am lucky enough to have a wing of a farmhouse, in front of a park. I really like nature. I like to live a quiet life with my partner, with whom I have been for almost 6 years, including 5 of cohabitation. I have a business that employs several people and a partner with whom I feel very comfortable and with whom I have been sharing this wonderful experience for several years now. Social networks, in this, are highly effective because public relations, my presence, my image, are amplified exponentially. In short, I lead a much quieter life than a few years ago, but that’s normal, I think. I am 51 years old and, although I feel in great shape, my way of dealing with life has inevitably changed.

How did you get into acting? Was it always your dream or did you have other aspirations?

As a child I loved Sergio Leone‘s films, Spaghetti Westerns. My father used to take me to the cinema to see them, because he loved that genre. He passed it on to me and I relived it in the garden of my house: every now and then I even had some small accident! Other than that, becoming an actor was just a dream for me. Today, with social networks, it is much easier to get closer to this world but once everything was further away and Pisa, in this sense, was light years away from Rome. At first I fell into it almost by chance and then I deepened my preparation in a school in Florence, with Giuseppe Ferlito, who was also my mentor on the first set, shared with an extraordinary actress like Monica Guerritore. That was my first film for the cinema: a good stroke of luck, since I made my debut as a protagonist. A great “full immersion”: afterwards I attended school for another two years. After graduating, I enrolled at the University but without success. As a boy I took things more lightly but, after the death of my father, I decided to turn my acting career into a profession, I moved to Rome and slowly I succeeded. 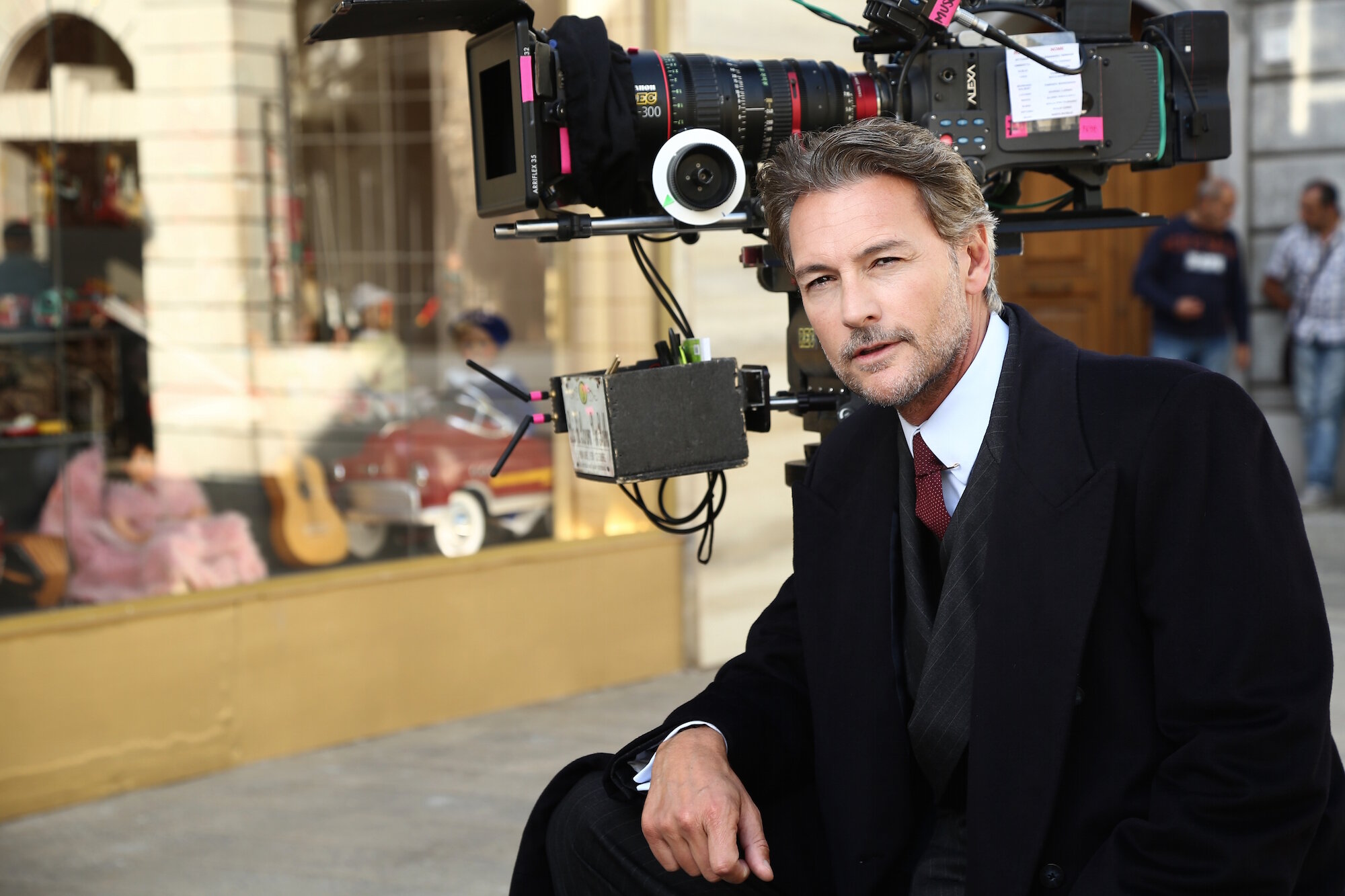 You have always moved between cinema and television. Do you have a preference?

No, I honestly don’t distinguish between cinema and television. Of course, a film, being shorter, must be more accurate, have more details. In television series, ten scenes are shot a day while in the film two or three are shot, so in the film there is generally more care for the character, but it is not certain that the results are always better in one of the two parts. Even on the set there are no particular differences, apart from the timing. When there is more time to work, obviously the quality is better but it is not so obvious. For example, at Il Paradiso delle Signore we have an extraordinary production system that combines the two: it seemed impossible, but the producers managed to combine quality with extremely fast production. Clearly, playing a film character who is in my heart is always a great ambition but I will never deny having chosen the path of ‘long seriality’ which, in many cases, gives even greater popularity to that of cinema.

Among the great characters you have worked with so far, there is also Franco Zeffirelli. What did that experience leave you?

We had a friend in common with Zeffirelli, a very nice make-up artist: that’s how I met him. I had the honor of shooting under the direction of the Maestro in A Tea with Mussolini and I remember that while we were shooting with Cher – the extraordinary Oscar-winning actress – the scene where we danced together after she had sung Smoke in Your Eyes to me, throwing the smoke on my face, he tapped me on the shoulder saying “Be quiet!”. Franco Zeffirelli was a giant but also a very humble and nice person: I remember him like this.

What is the best moment you remember as an actor?

There are many beautiful moments that I remember from my career but certainly the best one concerns a summer night (at 2 or 3 am) in the middle of nature, while I was shooting a series of great quality and to which I am very attached: Questa è la mia terra, whose female protagonist was Kasia Smutniak, flanked by an amazing cast that included Catherine Spack, Remo Girone, Massimo Poggio, Glauco Onorato, Francesco Venditti, Miriam Catania, Francesco Pannofino and many others: in short, a truly extraordinary group of actors ! I have a beautiful memory of those nights in the Agro Pontino: the story told the reclamation of the Pontine area during the Fascist period and those nights were truly magical. The emotionally strongest sensations, however, I think I experienced on the set of Femmina: the scenes were very engaging and working with an actress of the caliber of Monica Guerritore was really fantastic! 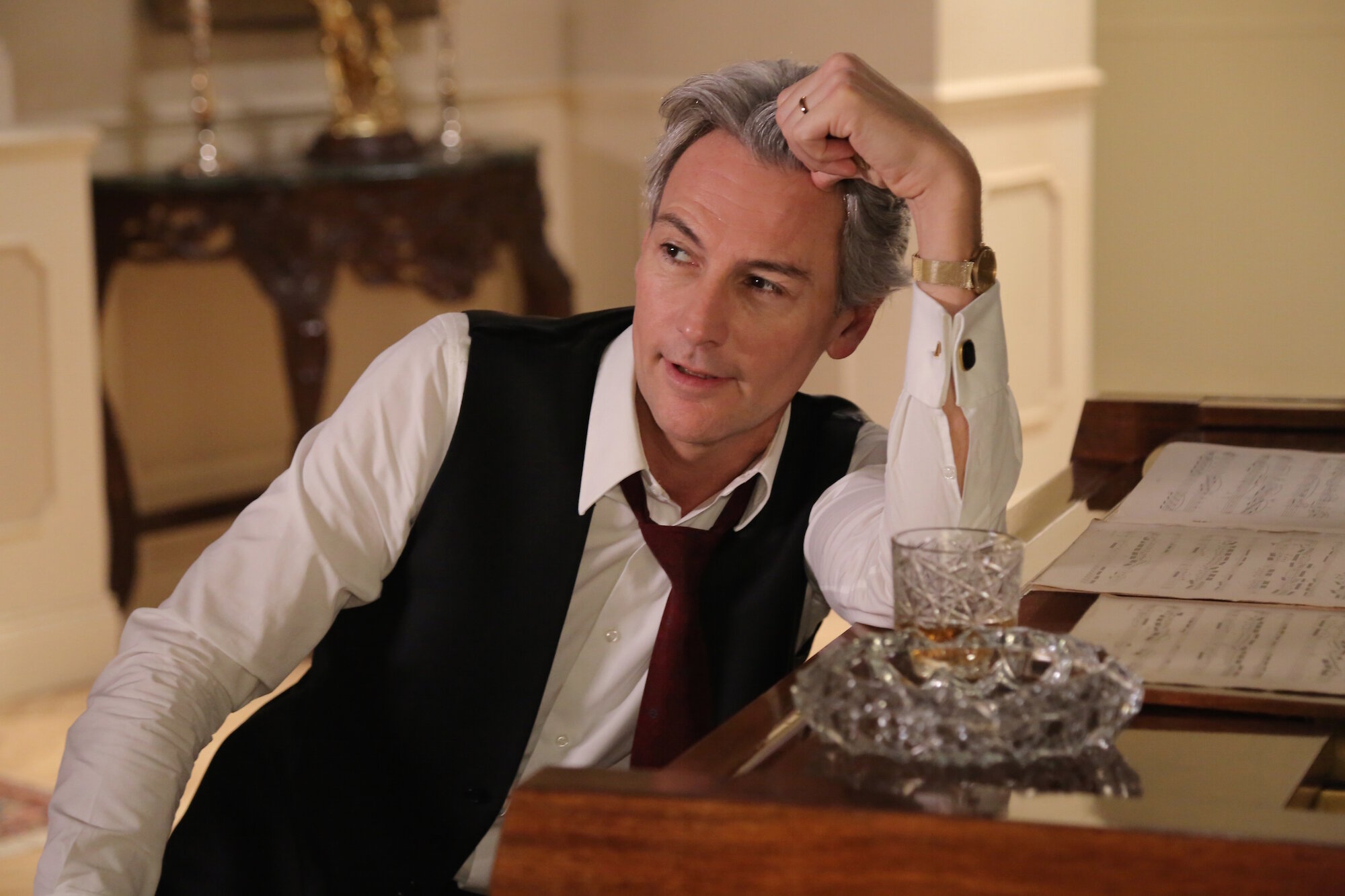 Speaking of your current commitment to the fiction Il Paradiso delle Signore, what prompted you to work on this series?

I immediately understood that it would certainly be a flagship of Rai, as it later happened. A project that, despite being in costume, embraces the future: the first of a long series available on the Raiplay platform, with great feedback. A very ambitious project, with an exceptional care for images, photography, costumes, sets, writing, and with very good actors. It is a project that I immediately aspired to: I was lucky enough to get into it and for this I am also very grateful to the artistic director who wanted me, after having attended my audition. A project far exceeding my expectations, which were already very high.

How difficult is it to play a cynical and ruthless character like Umberto Guarnieri?

It is difficult but also rewarding. As an actor, it is always stimulating to play characters who are a little out of line, like Umberto Guarnieri. Difficulties, in my opinion, exist in any role. There is nothing easy or obvious and playing a “negative” character can be a lot of fun, even if Umberto is a very charming villain, who reminds me of certain extraordinary characters from the television series I saw as a child. The villains, however, also have to be there to give substance to the story, and viewers end up fond of them too.

The series has reached its fourth season and is gaining more and more success. Can you tell us something about the events of your character?

I can’t anticipate anything, also because the working method is deliberately “work in progress”, so I myself discover the evolution of my character day after day. However, I have the impression that in the next few episodes all the knots left open from the previous season will be dissolved and we will see some really good ones! 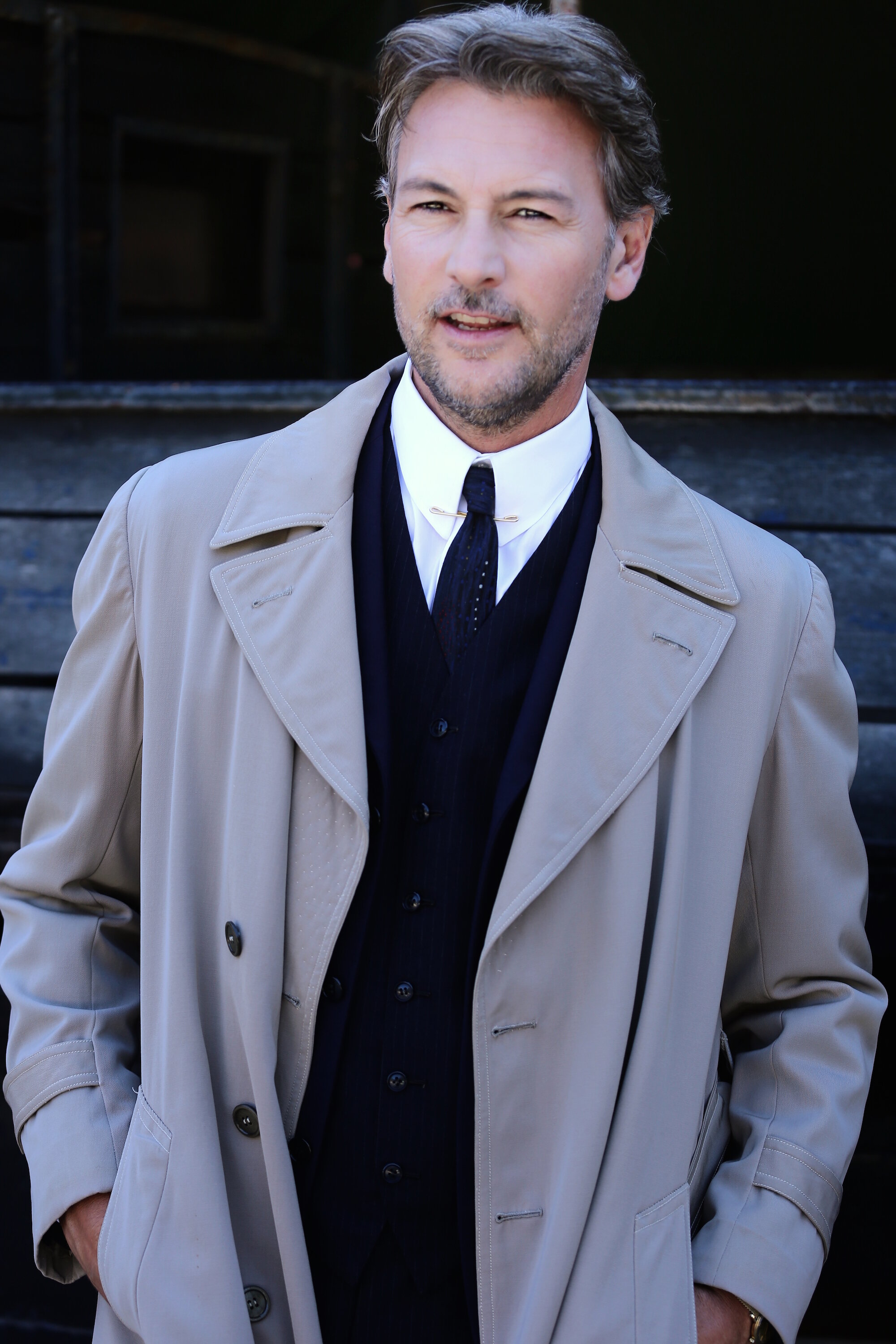 For several years you have also owned a restaurant: the Ristoro la Bottega del Parco in Pisa. How did the idea for this project come about? What type of customers do you target?

Yes, as a second job I am an entrepreneur: certainly, in this sense, there is a parallelism with Umberto Guarnieri. It’s been nearly eight years now. I am fortunate to have a very competent partner who knows how to manage even a small company like ours, with 18 employees and seven rooms above the restaurant. We have a large number of indoor and outdoor seats: in short, an activity that gives a lot to do, every day, but which also offers many personal and business gratifications. We went through the period of closure provided for by the anti-Covid decree in a critical, sad way, but we emerged well, confident: we took advantage of the closure to do some work in the kitchens that were necessary. The idea was born after having toured for a long time in restaurants because of my work: there, was born the desire to have one of my own, and experience that conviviality up close but also to use my popularity, my image, with those who initially come to visit us for that reason but then find an excellent quality/price ratio, a fascinating environment, service and competence: all fundamental components for the success of a company like ours. If there weren’t those, popularity alone would certainly not be enough.

What, in your opinion, must be the essential qualities of an actor and which of an entrepreneur/restaurateur?

An actor must have a good technical training or a good experience, which then becomes technical over time but I believe that there must also be something innate, which makes the difference. You may be lucky enough to embrace popular projects, which give great visibility, because moving forward, for an actor, also means acquiring ever greater popularity, which is necessary for the journey, but an actor cannot do without talent. The career of a restaurant entrepreneur, on the other hand, is made up of seriousness, rigor and a little “hair on the stomach”, as we say in Italy: you can’t be scared but you have to throw yourself into it; naturally always with awareness, rationality and careful to make the right choices but for that it takes a nose… So, I would say that the essential quality of an actor is talent, while that of an entrepreneur is flair.

Finding a good balance and being able to become a father. That would really be a great dream to fulfil. Let’s see … hopefully this is the right time!