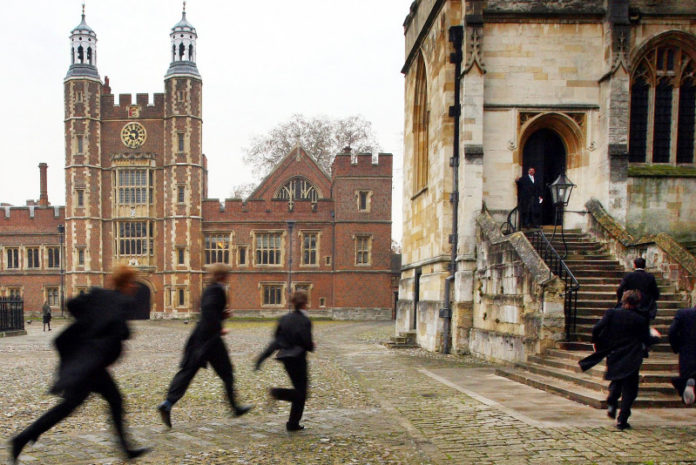 Eton College was born in 1440 from by King Henry VI who desired to found an institution that would shape and educate the next british ruling class in the English Language, aiming at creating a natural ‘bridge’ between high school and university education level. It started as a charity school which provided free education for seventy poor boys in Windsor, Berkshire, who then continued their scholastic career in the exclusive 70 colleges between Oxford and Cambridge, leading universities in the world.

For the first time, Eton College opened his doors to an Italian production team, London One Radio, allowing us to perceive the unicity and the peculiarities of this institution in its whole beauty. Dr. Marco Liviero has been the voice who guided such tour in the numerous rooms of the college, by providing insights on what distinguishes them from other boarding schools. He explains that Eton College was love at first sight: he visited the school during an academic trip, and already passionate about the British culture, theatre and Shakespeare, he pictured himself in this institution. A dream that came reality as, for the past 19 years, he has been the Professor of English Literature at Eton College.

Eton is not like any other boarding schools, students are developed in toto. As Dr. Marco Liviero explains, “Excelling in school is not enough. Being passionate is an essential quality, and what is mot important is to be willing to invest effort and time in these”. The academic part is indeed just a small component of the education that student receive from Eton: they develop their passions, initiative spirit, and sense of responsibility through the many extracurricular activities from sport, to music and theatre.

The Farrer theatre, the creative heart of Eton College, is one of the most magical places in the boarding school. And the very essence of theatre allows Eton students to grow as human beings, touching the many spheres of an inclusive development: it allows to “understand who you are and who you can become”, key elements in the receipt to disclose the full potential of each student. It is not surprise that many brilliant actors passed from here, from Hugh Laurie, the Dr. House protagonist, to Eddie Radmayne, who recently won the oscar for his interpretation of Stephen Hawking in the Theory of Everything.

Eton’s traditions have been lasting for more than six centuries, and it is the combination of such solid and extraordinary background, academic excellence and a constant innovation that allows this school to be the most prestigious boarding school in the United Kingdom, if not the world.

“The school master’s skill is understanding the different talents of each pupils”, a quote by Quasiliano, found in a fresco in the Head Master Chamber, the office of the Head Master in XIII century, well embraces and expresses the spirit of this brilliant institution.